Skip to content
It’s been an exhausting, wonderful, week. My cousin, whom we’ll call the Cameraman, and I left for Berlin on Monday night, if a little behind schedule (the keys, as it turned out, were in our mailbox. Men). We left just after midnight, and to apologize for the delay, he decorated the dashboard with rainbow-colored Christmas lights. 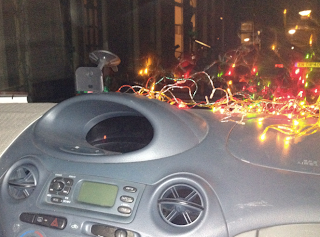 I dozed off after we entered Germany, and within another half-hour, we were pulled over.

But I was up. It turns out that Rastafarian Christmas lights and a Dutch license plate are a red flag for policemen (how proud I am of my country). The official reason for pulling us over was that, when the police vehicle drove by our car, Cameraman’s eyes looked glassy.

It turns out to be difficult for a man to produce a urine sample on command by the frigid 3 AM roadside, but of course he passed the drug test, and we were sent on our way. Two truck-stop naps and three gas stations later, we arrived in Berlin. Just in time to miss a fourth phone call from my aunt. 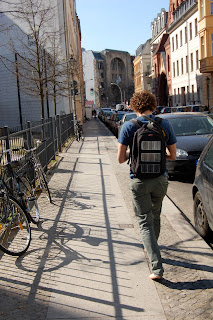 When we arrived, the hostel reception said, “Oh, are you young? Your mom just called.”

We spent the rest of the day getting to know the city by foot and eating (too. much.) food. The next day, we went to the Jüdisches Museum Berlin (he went willingly) and the Museum für Fotografie (I went willingly). On Thursday, he went off to photograph the city, and I took a six-hour tour of the Memorial Sachsenhausen. I’m choosing not to share that experience now, but I may write about it at another time.

Friday was sunny and jarringly beautiful. The Cameraman and I went out for coffee and he gave me a promised tutorial for my own camera, which resulted in a few pictures of the table and several super close-range shots of his face:

I don’t know why he thought I needed a tutorial.

He’d heard of a well-known vintage sunglasses store in Berlin that he wanted to visit (you know. Because he needed sunglasses). I had no choice but to take a look as well.

Come to think of it, I may need a photo-posing tutorial, too.

He fell in love with a pair of glasses with 24 karat lenses, that he’ll return for when he’s a millionaire, and I found these: 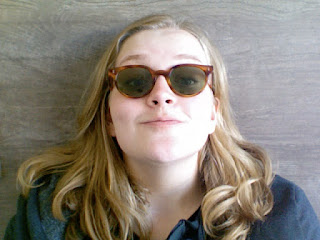 You know. Because I needed sunglasses.

I needed a third opinion, so I called my dad.

Sara: Hey Bop. I’mshoppingforsunglassesandIfoundthispairI’minlovewithcanIsendyouapicture?
Dad: Well, you should buy them.
Sara: You haven’t seen them yet.
Dad: But you’re in love with them. Is it from your own money?
Sara: Yes.
Dad: Then why are you asking me?
Sara: [Silence.] They’re from the fifties, you know.
Dad: Well, then it’s obvious.

So I further buoyed the German economy with some youthful zeal (you’re welcome, Germany), and then the Cameraman and I wandered barefoot through the city to the Denkmal für die Emordeten Juden Europas in blaring sunlight. 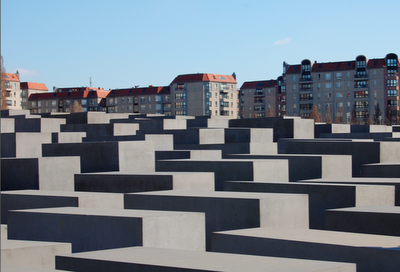 And as I watched girls in tiny shorts sunbathing on the large slabs of concrete, and it struck me for the how utterly bizarre the world is. That my reason for going to Germany was to visit the memorial at Saschenhausen, and that that trip fell on one of the first sunny days since I’ve been in Europe. That I can dance in a sunglass shop and, ten minutes later, be standing, barefoot, on a memorial for something the full weight of which can never be felt my generation.

I wrote a few weeks ago about feeling dwarfed by the past, and the thoughts I shared and those I read in the comments have stayed with me since then. I don’t have any hard and fast answers, and I will always be the kind of person to put my life in the context of a greater picture. But I’ve come to the conclusion that the world is too small for us not to build on top of the ashes. We can make room for the past, and save equal room for our own pangs, joys, love, and legacy.

I kept those thoughts when the Camerman and I walked to the park, and twirled barefoot in the grass. And driving back on Saturday, when we rolled down the windows and let our hair blow wildly around our faces, I felt the urge to laugh. Life is weird. It comes at you from all directions. And sometimes it’s hard to string together a cohesive thought, or blog post, about it, because life itself isn’t always cohesive. But I’m doing my best.

So now I’m home, in Holland, again. My feet are worn, and I’m tired. But I look outside, and I can’t help but appreciate the sunlight.

After all, it’s a beautiful day. 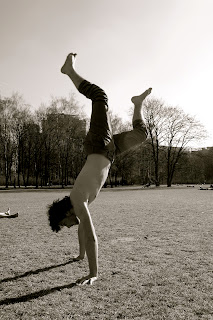 Hey! I'm Sara, an American writer, developer, and designer living in the Netherlands. In my spare time I can usually be found with paint on my hands, flour on my jeans, or scraps of fabric all over my floor.