The internet has brought us a lot of great things, from laughing Chewbacca mask lady to the ability to connect to basically anyone in the world. It’s also given us some stupid things we didn’t ask for, especially for the Instagram/Pinterest/blogger crowd. It’s as though we collectively decided that there wasn’t enough pressure around weddings, holidays, and having babies already and just made up a few more things for everyone to stress about. (Looking at you, gender reveal parties and Elf on the Shelf.)

I’d love to pretend that I’m above these trends. But I can’t, because, just a few months ago, I had a bridesmaids proposal.

In my defense, this one had been coming for a long time. During my gap year, I used to read a blog called Rinse. Repeat., whose author put together elaborately-decorated wooden boxes to ask her friends to be in her wedding. I loved the boxes, and the idea. Had I lived in the states when Ken and I got engaged, I would probably have put together something similar for my own future bridesmaids. But shipping five wooden boxes full of confetti, butterflies, and dreams across the Atlantic Ocean would have been more expensive than I’d liked, and any doves I’d put in the boxes would have been dead on arrival. (Just kidding. Ken would never let me kidnap doves.)

So I started from scratch. Which is, honestly, the only explanation for where I ended up: a murder mystery-themed bridesmaids proposal based on the board game Clue. 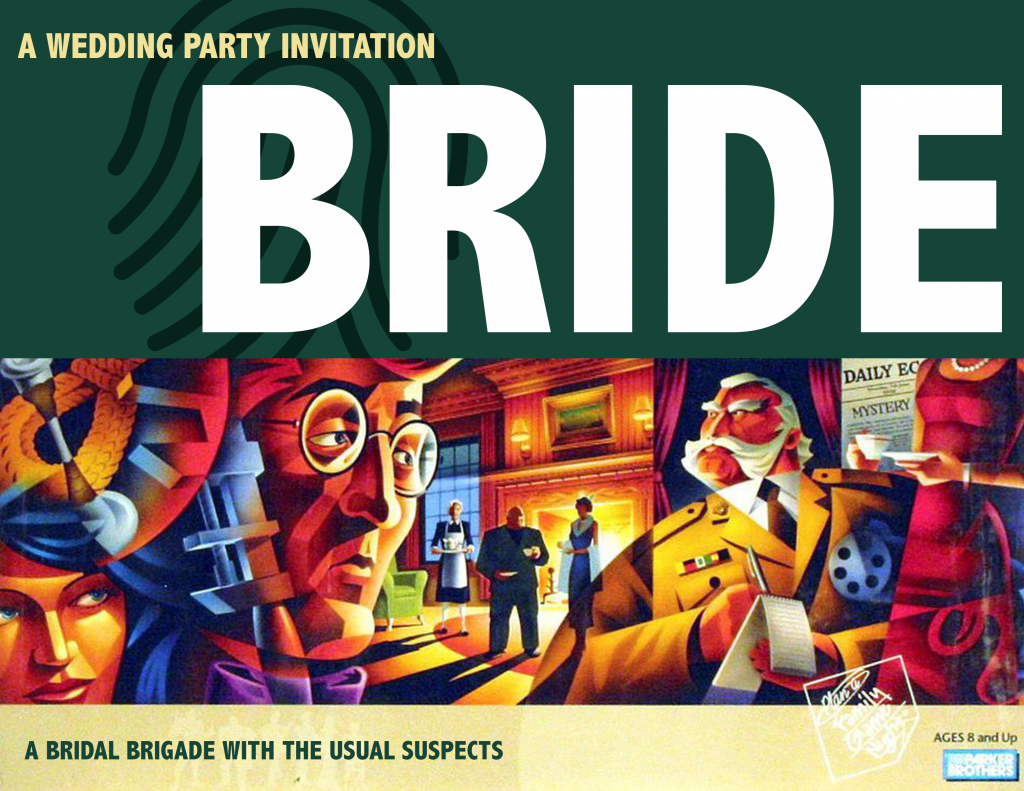 I loved Clue when I was growing up, and played it all the time with friends and family — I even had a Clue-inspired murder mystery birthday party in 7th grade. The premise of Clue is that someone has been murdered at an estate called Hill House, and that each of the players, characters including Ms. Scarlett and Colonel Mustard, are suspects. The mystery is: who murdered Mr. Boddy?

My game, Bride, was a little different. There was also an inciting event; in this case, not a murder at Hill House, but an engagement at Foxwood Flat (the name Ken and I jokingly gave our apartment when we moved in). Five of my closest friends are suspected of assisting in the upcoming nuptials. The mystery is: who will be my bridesmaids?

To ask my friends to be my bridesmaids, I sent them this email, attaching a “confidential case file” below:

Please see, attached, a file of great importance, detailing the recent events at Foxwood Flat and those who are suspected to be involved.

The authorities are currently pursuing the five of you as the primary suspects in aiding and abetting the upcoming nuptials. While, in most cases such as these, there is one member of the crime ring who is found to be especially guilty, I have examined each of your skills and experience and found you to all be equally suspect. For this reason I am assigning each suspect her own title.

If you would like to plead guilty to the charges of which you are accused, please respond to this email with a level of excitement that you feel to be appropriate.

The reference to the ‘crime ring’ had to do with how I’m structuring my bridal party. I love my friends tremendously and felt weird giving one or two maid of honor status above the rest. Instead, I decided to split typical maid of honor duties among the friends according to their special strengths. I give them each a title accordingly: Maid of Celebration, Maid of Ceremony, Maid of Coordination, etc.

Upon downloading and opening the ‘confidential case file,’ my friends saw this. The design based on the Clue answer envelope (you can see a picture of the original here). 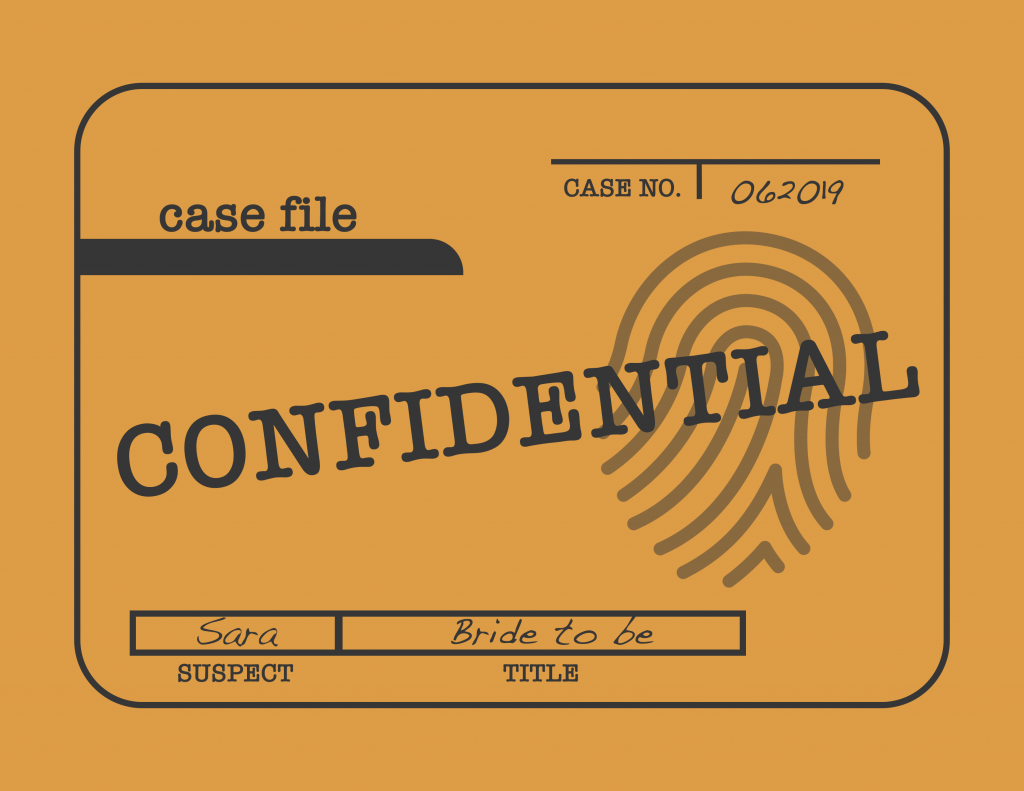 Next was a page based on the game instructions from the original version, designed to look like a scattered detective desk. I’ve blurred my friends’ faces for their privacy. 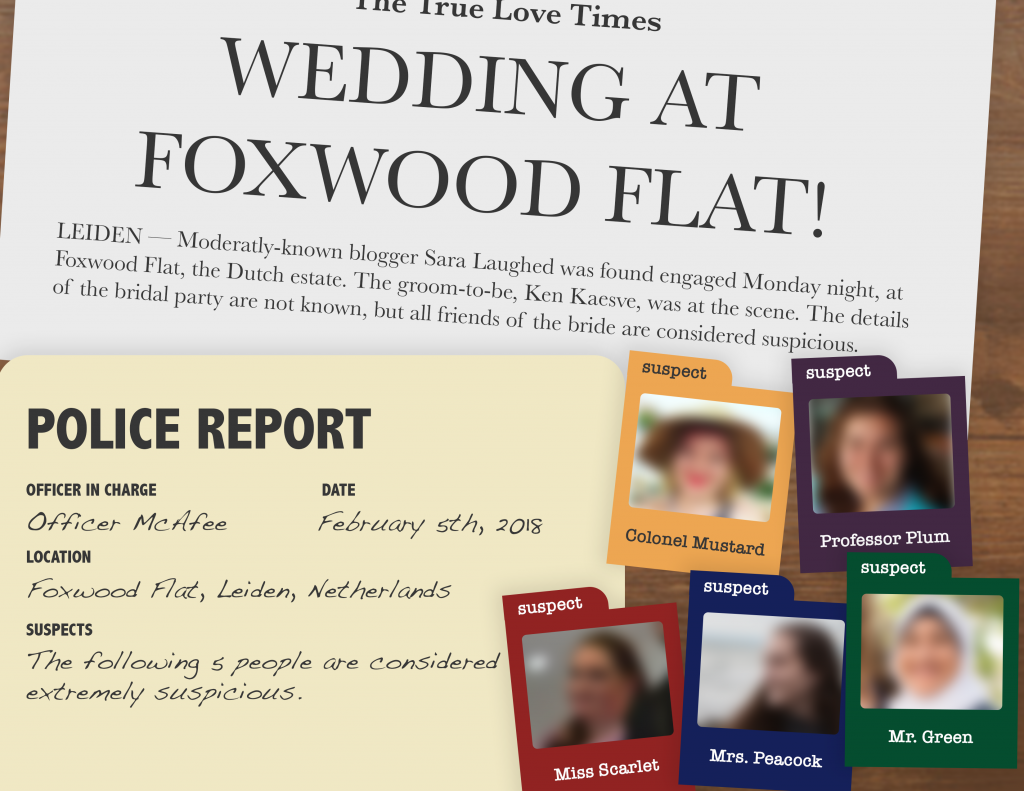 This brought us to the corkboard with relevant details, which posed the question…

After this were individual profiles of each of the suspects. The profiles detailed their relationship to the bride and their role on the wedding day. Here are a few for names and faces you’ve seen around the blog before. 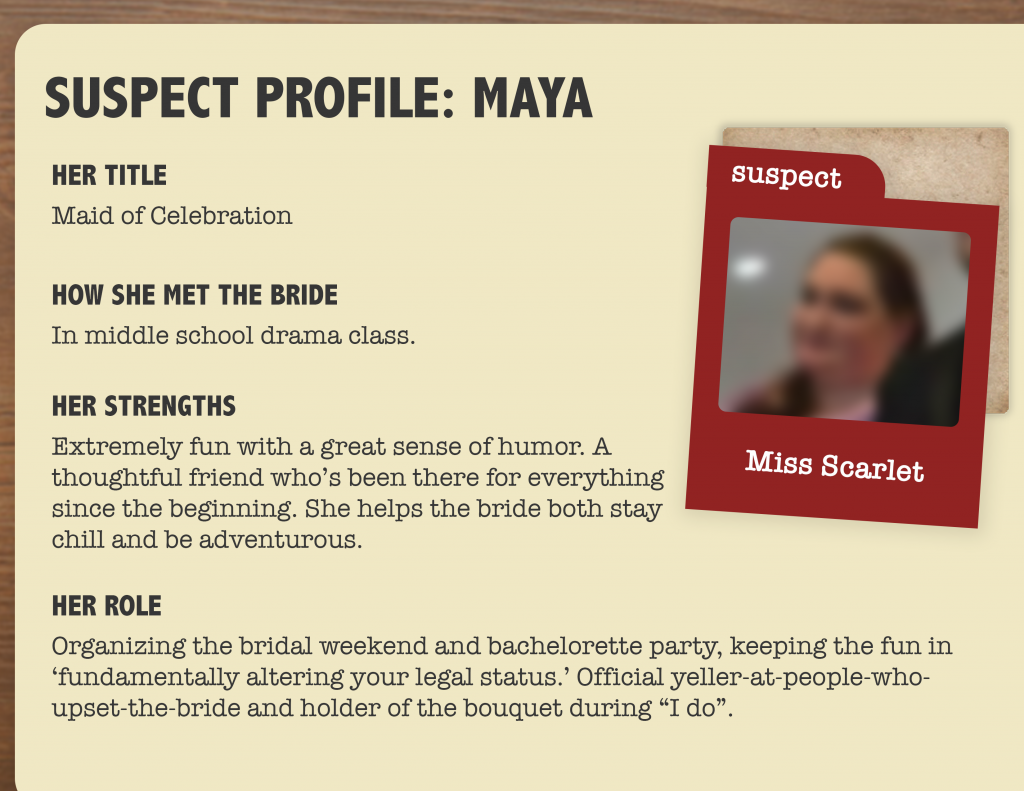 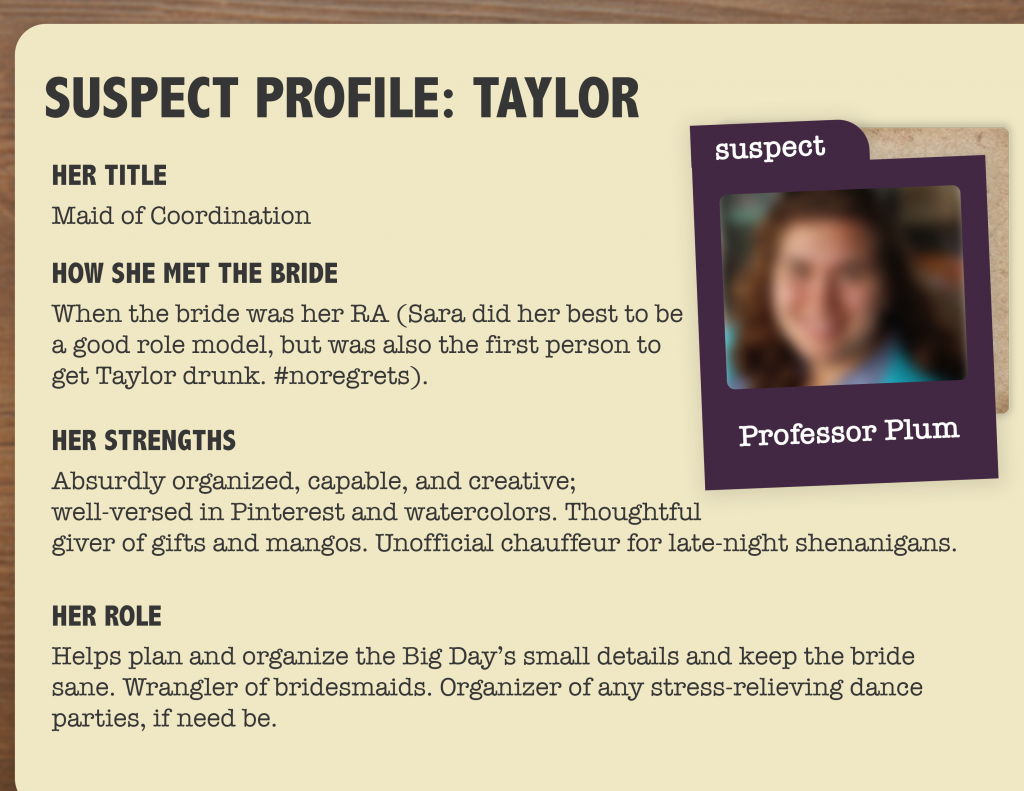 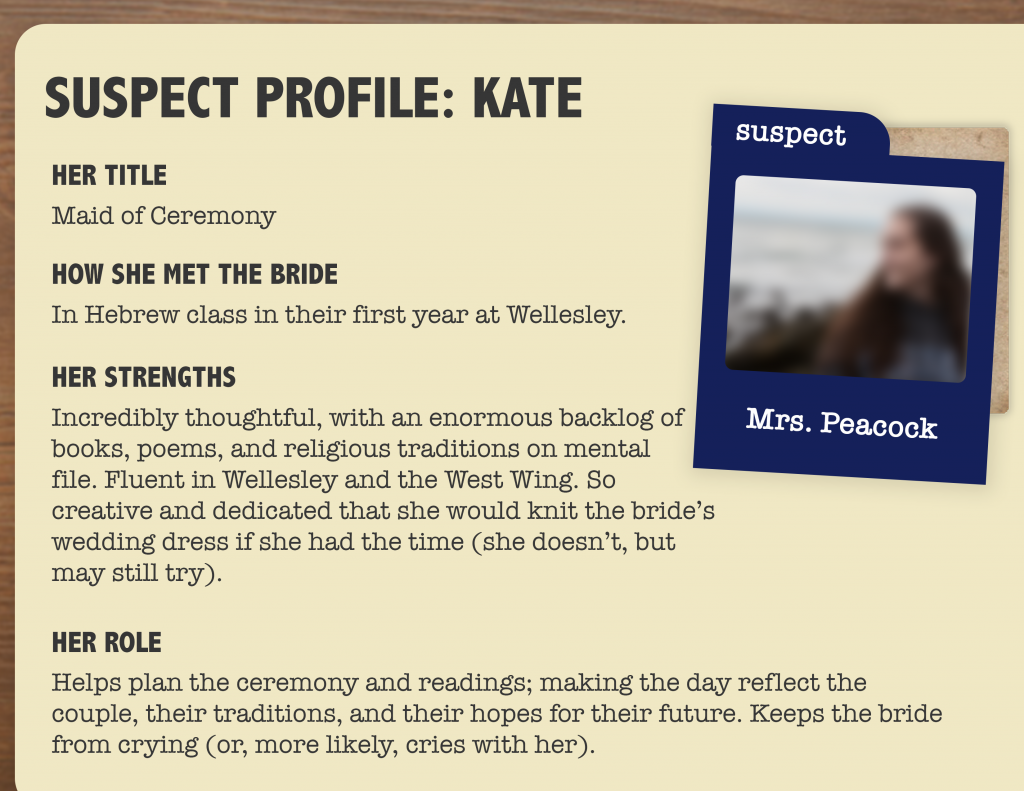 I sent the file and email with no context or warning, so I wasn’t sure how my friends would take it. With the exception of Mr. Green (who briefly thought from my cryptic email that she had actually done something wrong) I had no need to worry. Their responses were hilarious and in character.

So, for those of you who are riveted by the mystery itself, I’ll let you know how it worked out: all five members of the ‘crime ring’ agreed to be my bridesmaids. Keep an eye out next summer for any announcements in the newspaper’s wedding section — or maybe the police blotter. 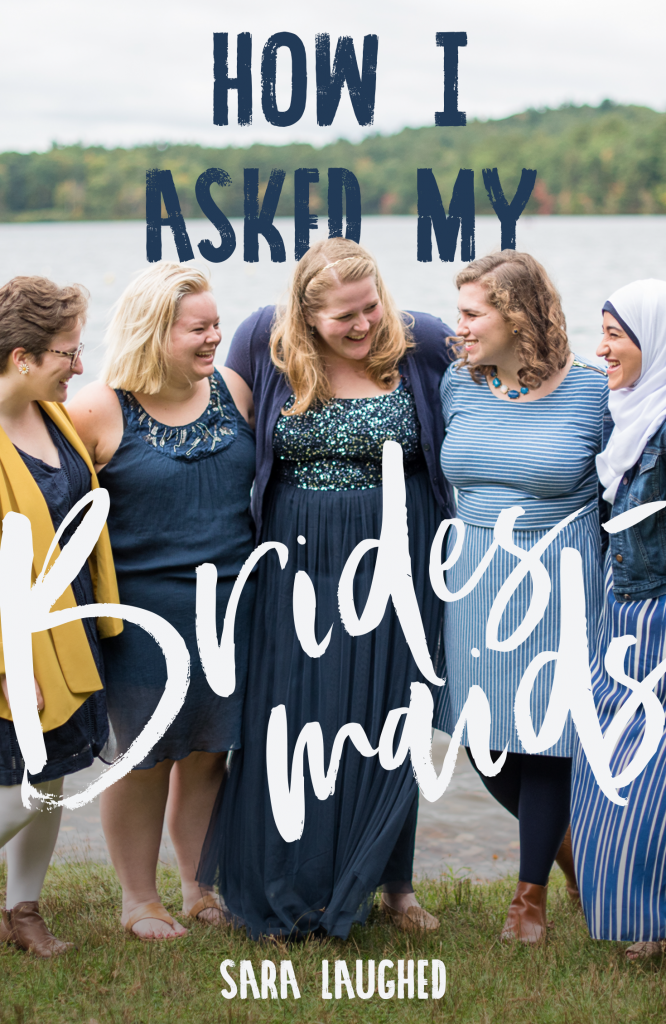