I am an outfit repeater.

Actually, that’s an understatement. For the last two weeks, since September 1st, I have been wearing one dress. The same dress, every day. Sometimes I wear a different scarf or cardigan, or an eye-catching button. But the one constant is the dress. 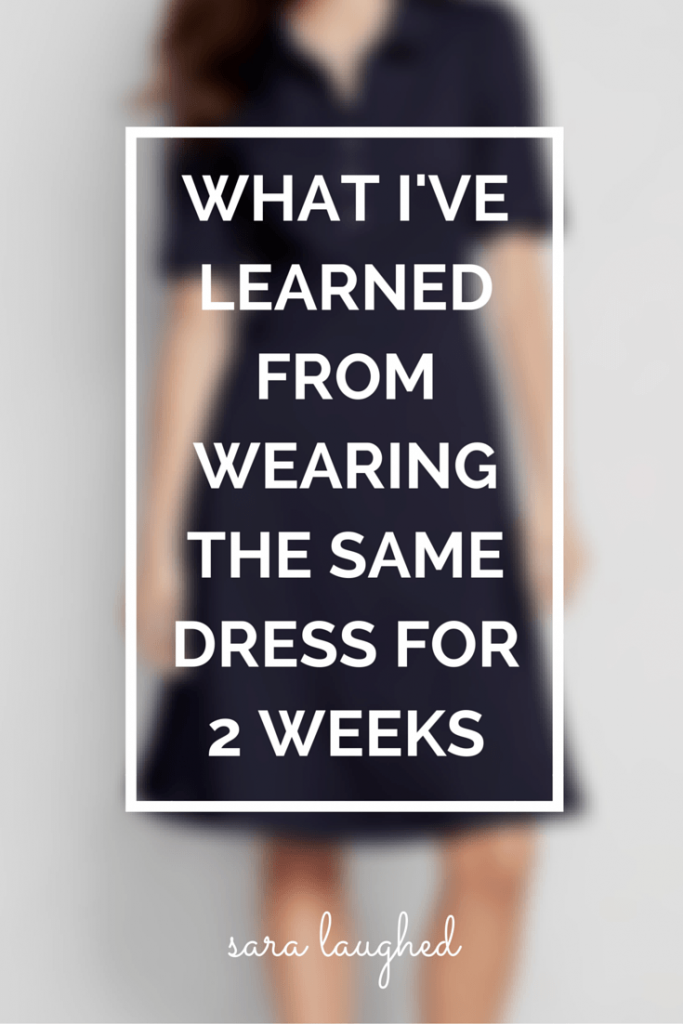 If you haven’t heard, I’m doing a charity fundraising challenge. To raise money for the women’s education charity Camfed, I am wearing the same “uniform” every day, representing the school uniforms that 60 million girls around the world don’t get to wear because they can’t go to school. This is a big deal not just because girls’ inequality around the world is a a huge problem, but also because education can make an enormous difference in narrowing that gap. To summarize from my intro post:

To try to help combat that problem, I’m looking to raise $300 in the month of September, the cost it takes to send one girl to school in sub-Saharan Africa for one year.

As you can imagine, that’s not easy, but the experience has taught me several things so far.

The first is that people do not notice your outfits. No, really. I have worn the exact same dress every day for fifteen days straight, and no one has noticed. Not a single person has come up to me and said, “Hey, didn’t you wear that yesterday? And the day before?” Everyone is too busy minding their own business to notice what boring old me is wearing. That’ll be a nice reminder once October swings around and I’m worrying about what to wear again.

The second is that asking for money is hard. Like, really hard. I hate it. I hate feeling like I’m cornering someone into a conversation they don’t want because I’m trying to raise money for charity. But I am really, really passionate about this cause, so I’m doing it anyway. Camfed is important, and girls’ education is important. So I’m trying to ask, even though I find it difficult, because I want to make a difference.

The third is that wearing the same outfit is difficult, and it is liberating. I am not a shopaholic, and I don’t own a ton of clothes – but I do like clothes. I like feeling pretty and indulging every once in a while, and I love the thrill of a new dress or shirt that makes me feel great about myself. As you can imagine, putting on the same dress every day for 15 days is less than thrilling. But it is also a very liberating experience. In the past few weeks, I have spent less time in the morning getting dressed, but I have also spent less time thinking about myself. I throw on my dress, add a scarf or so, and head out the door. I don’t spend ages looking in the mirror, trying on this and that. And it feels good. It actually feels great to be spending less time on myself and more time living my life.

I’m sure that this journey will teach me many more things in the coming two weeks, but that’s where I am now. This project is really exciting, but it’s also challenging. In the end, I hope it will make a difference for more people than just me.

Project Update: We are at only $55 out of my $300 goal! With only two weeks left to go, I hope you’ll consider donating. You can learn more about the project here, visit the organization’s page here, and donate here. Thank you for your support!