So my aunt and I were stranded on a train to Leipzig, without laptops, working phones, money, or (for me) shoes. To make matters worse, there had been a leak in the back of the train, so my socks were wet, and I was starting to no longer feel my toes. The conductor informed us that we would have to get off in Leipzig and sleep in the train station until a new train left for Berlin the following morning. I felt a little bit like my lungs were very slowly leaking air.

And this is the part of the story where a series very good people start to make the best out of a very poor situation:

A man from a few rows back walked up to me.

“I don’t speak very good German, but I understood a little of what you were saying. Is it true that you have no shoes?”

I nodded and laughed a little.

“Well, that is very good luck, because I just bought new shoes today, and I haven’t thrown away my old ones yet. They’re not in very good condition. I mean, they have holes and everything in them. But you can have them, if you want.”

“Yes, please!” I said. “That would be so great. Thank you so much.” He handed them to me, clearly a little embarrassed about their worn and be-holed state. I took them and hugged him, to which he seemed a little surprised. You don’t realize how American you are until you leave America.

Then the train conductor came up to us, and held out a few plastic-wrapped train blankets. “For sleeping on the station,” he said. “You two have been very calm. I am very impressed.”

My aunt and I graciously (I hope) accepted the blankets, and I stifled the urge to give a second hug, mostly because this man was German and his mustache intimidated me.

The train stopped about a half hour later in Leipzig. As my aunt and I made our way to the door, I passed the Juraj, Gracious Man of the Shoes, gave him the address to my blog (“I’ll write about you!”) and got his email address (which was on a slip of paper on my desk until this morning, and now, of course, I cannot find it- Juraj, if you are reading this, please email me or comment so I can thank you personally!).

And in this state, my aunt and I entered the Leipzig Train Station: with torn shoes, no coats, two train blankets, and only The Book of Stress for Idiots and Biblical Literacy to guide our way. 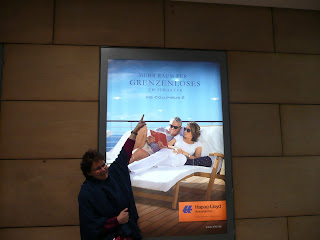 This advertisement reads, “More room for unlimited vacation-luck.” The irony was not lost on us.
I looked more than a little like a self-financed missionary. 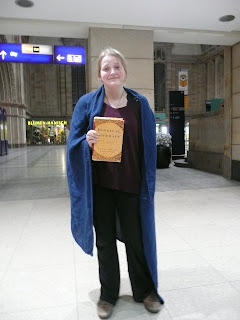 Or a secular Bible dork with poor taste in travel attire.
3. The People of the Leipzig Service Station
My aunt and I shuffled over to the service station. The woman behind the counter took her train ticket and stamped it, then began typing furiously into her computer while the other conductor made kind jokes and I smiled and pretended to understand them.
Two minutes later, my aunt and I had two (graciously free) tickets to Berlin, four train station food-vouchers, and instructions to sleep in the 24-hour fast food store.
4. The Boy Behind the Counter
We set off to find McDonald’s. 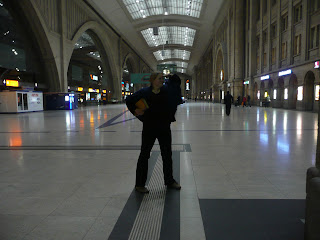 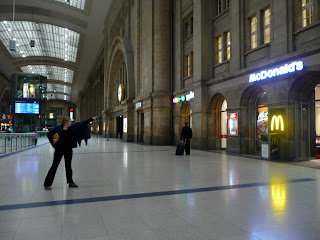 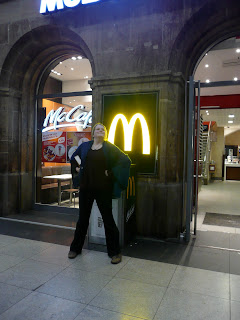 …Conquered. The American Way.
We shuffled to the counter.
“What do you want?” my aunt asked me. I looked at my watch.
“It’s only eleven. I don’t know if we should eat now.” I glanced at the french fries advertised on the wall. “Then again, we won’t have breakfast tomorrow…”
“And we haven’t eaten since five…”
“And we are very, very sad.” We looked at each other.
Decision made.
My aunt held made eye contact with the boy behind the counter and held out our four food-vouchers. If pooled together, they were almost enough for two milkshakes and a small serving of french fries. She offered our sob story in her increasingly-proficient high school German, of which I could make out a few phrases.
“…we have made a bad mistake… …on the wrong train… …all our bags are gone… …we must stay here until the morning… … almost enough for french fries?“
He looked at us pityingly and took only two of the food vouchers.
“One moment,” he said, and disappeared in the back. A minute later, he returned with two milkshakes and two french fry servings.
“Thank you so much,” my aunt said, and I did my smile-and-nod-with-grateful-eyes bit.
“Veilen, veilen dank,” I tried. He chuckled (at me? With me?) and pointed to the padded bench by the wall.
“For sleeping.”
My aunt and I sat down (after making smiling-nodding-grateful-eyes at all the other employees).Do you know that sketchy person located in every McDonald’s after midnight, whom all the other customers avoid like the plague? We were those people.
5. My Aunt
After a few hours, we started dozing, and my aunt let me sleep with my head on her lap. She stayed awake to keep guard and protect my honor from other roving most-midnight McDonald’s customers. Every half-hour or so, I woke up to see her reading with a protective hand on my shoulder. Considering that she stayed awake for a total of 48 hours, and that, even with my few hours of sleep, I felt like this the following morning… 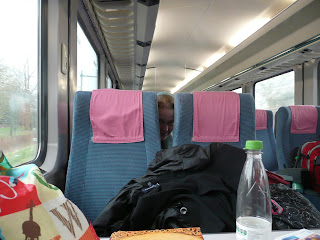 Merrrrrrrrrrrrrph.
… I am eternally in her debt.
To make the end of a long story short, we left Leipzig for a 5 AM train to Berlin, took a six-hour train to Amersfoort, then a train to Utrecht, and then a last train home. When we were finally reacquainted with our luggage, everything was there, with the exception of our brownies and the Czech beer my aunt had bought for my cousins in Prague.

According to the conductors at the Berlin train station, all our perishable items had to be vernichtet. We hope that at least one of them had a chance to vernicht the beer himself, lest no have a chance to enjoy it.

So I have learned several things from this trip. Firstly, try to keep your shoes within 60 feet of you at all times (Feet? Feet? Get it? No one? Okay). Secondly, do not underestimate the graciousness and generosity of others (and, for the newest generation, don’t forget to thank them on the Internet later).
And thirdly, for the sake of your sanity, avoid spending more than 16 semi-consecutive hours on a train at all costs. Luckily, when my travel companion and I leave for Berlin on Monday, we will be going by car.